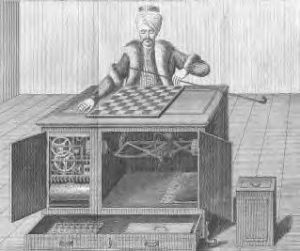 Let’s take the bad Chinese
and the good Hungarian people.

It all started in the ancient world and it was the Chinese’s fault. They were sick and tired of the persistent Mongolian attacks and they built the Great Wall on their northern border. The Mongolian economy was based on warfare and robbery. To the North the cold Siberia restricted them, so, the Khan gave the command: “Go West!” This Mongolian slogan was adapted by the American pioneers a thousand years later. Recently, descendants of Genghis Khan say that the American apple pie is of Mongolian origin, too, but we all know that the claim is false. Apple pie is a Hungarian pastry. As a general rule, we, Hungarians invented everything on Earth from the matches to the H-bomb.

The pressure from the East initiated a huge migration of the Eurasian nations. The vacuum on the other side of the continent, caused by the decay of the Roman Empire, accelerated the movement. The Hungarian tribes were pushed from the Ural area to the former Roman province Pannonia. They settled down in the late 5th century and they expanded their territories during the next thousand years. (The difference between glorious gain and unscrupulous acquisition of land is that the former is carried out by us.) In the 16th and 17th century the Osman-Turkish Empire incorporated the middle of the country. Hungary’s northern part was controlled by the Austrian Habsburgs; the eastern third, Transylvania became a pseudo-independent state. After the Turks had been expelled, Hungary was reunited under the rule of the Habsburg Emperors. (According to the feudal laws the actual Austrian monarch became the king of Hungary as well.) This was the time and place when and where the chess automaton was born.

The Owners’ Manual of Chessmaster 4000 calls the inventor Wolfgang von Kempelen a Viennese expert in hydraulics and acoustics. The statement is true but it needs some minor corrections regarding his name, residence and profession. His given name is Farkas, which is the Hungarian equivalent of the German name Wolfgang. As to his origin, his father was either Irish or English, but daddy did not hear the voice: “Go West!” and he settled down by the Danube river. The Habsburgs gave him the title of Hungarian nobleman. (The German word ‘von’ in front of the family name refers to nobility.) Farkas was born in Pozsony, Hungary, which city is called Bratislava today and it is the capital of the new Slovak Republic. (Clear, isn’t it.) He served Maria Theresa as a counselor of the Austrian Imperial Court, but he spent most of his time in Pozsony. He had always been interested in technical sciences, but in those days the only respected profession for a nobleman without financial resources, besides being a priest or an officer, was to become a lawyer. After office hours his favorite pastime was to design and create equipment like talking machine, garden fountains, water lifting equipment, typewriters for the blind (half a century before Braille).

The chess automaton was first exhibited in the Viennese Court in 1769. It was a desk-like box filled with cogs and gears. A life-sized figure of a Turk was sitting behind it. In fact, a human player was hiding inside the desk. Images of mirrors made him perfectly undetectable and unrevealable. The secret had never been discovered either by the spectators or by the opponents. However, the inventor eventually told about the deception to the Prussian King Frederick the Great. A short encounter on the operation took place between them behind closed doors and, as witnesses stated, the King left the room laughing: “Even a child could have figured this out!” he said.

The fame and publicity of the automaton were outstanding. The inventor himself called it children’s toy and he was bemused by the admiration surrounding the equipment. After a while he grew tired of the shows and stopped giving performances.

After Kempelen’s death in 1804, the automaton’s new owners were only interested in money. They exhibited it mostly in exclusive shows. For example, Napoleon was invited for a game. As legend has it, the player inside was advised not to defeat the Emperor. Napoleon tried to make illegal moves. The third time the automaton “lost patience and control” and swept the pieces from the board. Napoleon avoided getting defeated and could leave with pride. The story however contradicts the score sheet published by Ludwig Bachmann in 1920:

“Play a game of chess and I’ll tell you who you are!” Says the proverb. Researchers try to solve the dilemma: “Was Napoleon brilliant or crazy?” Probably both. Disregarding his aggressive and ignorant second move, White’s play was not too bad for an emperor. What he missed, according to the connotator, was a resignation after Black’s 11th move.

The automaton ended up in the Chinese Museum in Philadelphia. It was sitting in storage for 14 years with no one’s interest. A fire in 1854 destroyed it and the secret of the first chess machine was buried forever. I told you that the Chinese …