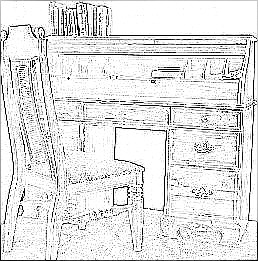 The writer suddenly hit the brake A desk stood on the road side, the desk he’s been dreaming of for ages. A loftlike structure of tiny shelves and compartments elevated above the writing surface that could be covered by a roll-top. The top shutter would also hide items left on the desk. Drawers located on both sides of the legroom, two shallow, two well sized and two definitely deep ones.

“Tolstoy, Thomas Mann and Victor Hugo might have created their masterpieces on desks like this”, the writer thought.

Next to the desk a sign indicated that the owner wanted to get rid of it for a modest price. The writer rang the doorbell, handed over the asked money without bargaining. He carried his new treasure home. He placed the desk in the most valued spot of the jam-packed apartment, although he had to rearrange his room completely.

“I must write, right away”, he said to himself.

He sat down and rolled up the desk’s shutter. Inspiration came immediately, as if he opened a whole new world. For a while, he submerged in the beauty of the small shelves and racks, which he already populated with useful objects, like a ruler, staples, paper clips, and a magnifying glass. He enthusiastically grabbed a pen but could not find any paper at home. For several years, he has typed his works directly in his computer, and submitted them over the Internet. He scribbled down a working title, “When the urge of writing strikes”, on an old used envelope, and moved over to his computer but the flow of ideas that rushed him just a minute ago suddenly stopped.

He tried to revive the lost mood for a couple of weeks, even bought paper, but all he came up with was an aphorism: “Inspiration flies but a desk stays forever.”

This idiom was picked up later in Peru, where a movement, turned from Marxist to pure Materialist, replaced the slogan of “Proletariats of the World, Unite!” in the header of its newspaper with this tagline. By that time the saying distorted, the word inspiration had been replaced with spirit. The Peruvians did not know about the pathetic origination of the sentence. That the writer dumped the desk in the street, and nobody wanted to take it, would have surprised them, as well as the fact that the word inspiration – by the translator’s mistake – has been replaced with spirit in the Spanish version.

The associations of a desk with spirit and with inspiration are equally peculiar but quotations do not necessarily become popular because of their wisdom. Dilettantes may suspect hidden meaning behind ambiguity, and vice versa. A remarkable statement may not mean anything for those who missed the context. For example, the nurse in the hospital thought that the last words of the writer didn’t make any sense. They went: “For those drawers … I would have loved to write.”