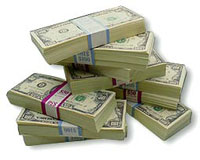 I just received your letter among a lot of junk mail today. Yours is not junk at all. It is so personal I have been really, really touched. How can I compare your kind two-pager with that brief notice from my employer that I am required to participate in Sexual Harassment Training? “What a country!” I should say with Yakov Smirnoff, if I were an immigrant comedian, but I’m only an immigrant statistical analyst. “They want to train me how to sexually harass!”

Or take another mailing. That is really abrupt. My bank reports that I owe them $1792.29. Unlike in yours, there’s no personal introduction, no business card enclosed, no visualization of the bright future. And the details are not exciting, either: previous balance, cash advances, billing period, etc. That is junk. Yours is not. You were writing me about $5,000,000.00, about good news, about worry-free life. You used nice sentences like “Please feel free to call.” They were rude: “Questions? Call 1-800-555-2843.”

Your letter starts with the promising sentence: “Even though we have never met, I may turn out to be one of the most important people in your life.” “You must be a beautiful woman!” I started to fantasize. Then I read your name and I figured out your gender. “These newcomers might be almost as smart as born Americans. They know that name implies gender,” you would think. But it is not as simple for a foreigner as you would think. Once I responded to a rental ad. I did not know the difference between the names Dennis and Denise and I almost became a roommate of the opposite sex. (I mean the opposite of what I wanted.) But don’t think I lost my interest, just because you’re a man. Thank you for reaching out your friendly hand toward me (with $5,000,000.00 in it). You deserve my trust, so, let’s get to know each other!

I came from Hungary about six years ago. You know that small country in the middle of Europe, between the non-existing Soviet Union and the non-existing Yugoslavia. It is South of the separated, i.e., non-existing Czechoslovakia, next to Transylvania, which country – believe or not – does exist. (If we consider being in the body of Romania as existence.) When I arrived to the USA, I was very naive. Also, I was a proud Hungarian. I remembered the proverb from home that says: “Hungary is the bouquet on God’s hat.” I should have learned here that Hungary is at most a spot on God’s hat, if it is on his hat at all. I learned the American proverb about us: “If somebody enters the revolving door behind you and exits in front of you, you met a Hungarian.” Funny, isn’t it. I don’t think it is. It really hurts my national pride. Number one, it is not true. Number two, front and behind are relative terms, especially in the case of revolving doors. Number three, who do you believe? The guy, who came out second? Ridiculous!

Pride is very important for the people of small East European nations. You’ve got your Grand Canyon, they’ve got their pride. You should respect their pride. They can kill if pride got hurt. (See Bosnia.) After a while pride and respect are not the issue, but they still can kill.

In the last six years I have been very hardworking to learn how to be American. I learned, for example, that here they don’t use the obsolete Latin word ‘diligent’. People here are not diligent. They are hardworking. I learned that a theater is not a theatre (you know, where actors and actresses play), but a movie theater. I learned, how to eat popcorn in the theater. I’m still not a perfect American, I can’t spread the popcorn all around the floor like born Americans can, but I’m practicing. I’m working hard on it.

So, if you are asking, what have I done lately, I proudly say: I learned. I learned about freedom. I learned that I couldn’t afford items advertised as free. I learned the language, which seems similar to English. I learned the most important American words like ‘bullshit’ and ‘sucker’. Also, I did learn that nouns could be used as verbs. For example: “Don’t bullshit me!” Please don’t take it as an offense against your letter. Now, let’s return to you.

You enclosed your business card. That convinced me of your seriousness. In Europe, after that old French guy called Descartes we say: “Cogito ergo sum.” (He spoke in Latin in order to sound like a foreigner. Here foreigners try to speak in English and we sound like Americans from Downtown L. A.) “Cogito ergo sum” stands for “I think, therefore I am.” Here you say: “I have a business card, therefore I am.”

After the introduction, you put me on a pedestal of a selected person eligible for the $5,000,000.00 Grand Prize. I admit, my heartbeat got heavier, my breaths got shorter. Yes, they did. At the first dozen times I received such letters. Now I know why America is called the Promiseland in Eastern Europe. Promises, promises. Later I always find the fine print remark: “if your number matches with the winning number”. But, how can they match, when my number has thirteen digits? Thirteen eggs can match. Thirteen pins can match. Thirteen matches can match. Thirteen digits can’t match with another thirteen digits!

Minor detail that ruins my happiness, like the minor difference between Dennis and Denise. The very detail I would like to know is: how many people received your letter that you might be one of the most important people in their lives? Please do not think that I am jealous or too picky, but this really matters to me. Or, as you would write:
“This really matters to me.” Let’s say one million people received the same notice. (If I look at those thirteen digits that can differentiate ten thousand billion separate numbers, I’m afraid I extremely underestimate your capability, but let’s stick to the lousy one million.) It means that my chance to win the $5,000,000.00 (what a good feeling to write down those zeros) is about 0.000 001 (what a bad feeling to write down those zeros). But if I start the calculation from the thirteen digits, the chance that the winning number will match with any of the million selected persons’ numbers is 0.000 000 1. With a slight risk of pay-off like this, I can offer $5,000,000 to you, my friend, and to a million other people, not in 30 years installments, but instant cash, even though I currently owe $1792.29 to my bank.

I have to confess: I am cursed by my profession. I know that the possibility of my winning, 0.000 001 times 0.000 000 1 is a longer form to express the term ‘nothing’. Nothing as zero. Zero as null, nada, zip, nix, zilch. If you disagree, let me ask you something: Would you carry an umbrella all day if the weather forecast said that the chance of rain was 0.000 000 000 000 1? I doubt it. And, although I find it unlikely, suppose that the non-distributed numbers will not participate in the drawing, and we are talking about the bigger chance: one in a million (provided that only one million selected households received your letter). That’s why I want to know the number of people eligible for the Grand Prize. Could you send me a short letter, not a two-pager, just a card that indicates that figure? Or, you know what, let’s make a deal. If the number of the happy, selected-to-be-multi-millionaires is one million or higher, do not respond to my request. You can save a stamp and a card. (In fact, a million of stamps and a million of cards.) Little pieces of papers produced from a branch of a tree. Had you not started the whole thing, you could have saved a forest. Sorry, I changed my mind. Don’t consider me a friend anymore. I will lose or recycle your business card and instead of chasing fake promises, I will work hard and try to find ways to become a real American. Other ways than diligently entering sweepstakes.

Maybe I’ll publish this letter for some money. Real money. You know, the green stuff, not the pink one.